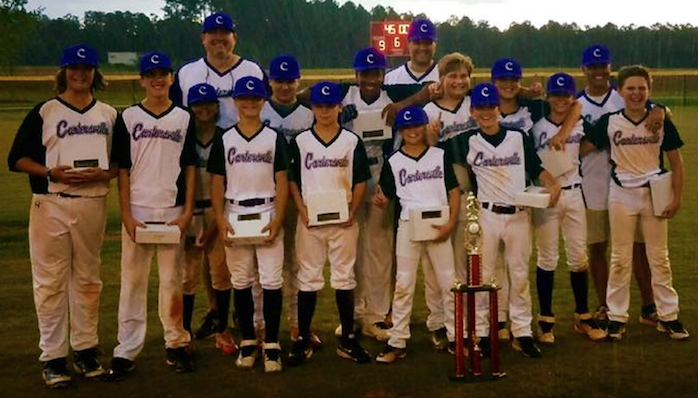 Tyler Driggers had two hits including a home run and three RBIs for Bartow. Devon Pryor also had two hits and a home run with two RBIs. Brice Craig drove in a run with a double and a triple. Braden Powell and Cameron Constantine each contributed two hits while Ashton Phillips added one hit and one RBI.

Cartersville pounded out 17 hits in their three offensive frames to secure the four-inning victory while Tyler Shelton (4 IP, 1R, 0ER, 3H, 2BB, 9K) kept Bartow off the scoreboard except for a single run in the final inning.

Braden Powell, Tyler Driggers, and Ethan Reynolds had the only hits for Bartow County.

Cartersville Little League 12U B-Team won the district title with a 13-3 win on Saturday and a 14-3 final score on Sunday.

Pearse Mullinax added a pair of hits and two RBIs and Colt Williams had two hits for Cartersville. Jack Chatman and Silas Freeman both added a hit and one RBI. Jacob Peace and Higgins both scored twice with three walks each. Brody Tidwell also scored twice on a pair of walks while Kaden Stephenson and Collin Genrich each scored a run and reached on a base on balls.

Hayden Blalock had two hits including a double and one RBI Saturday for Bartow. Landon O’Neal added a double Andrew Stiles had the other Bartow hit.

Cartersville Little League 12U B-Team took a 5-1 lead with a five-run second inning and added runs in each of the succeeding innings on their way to a 14-3, five-inning victory to clinch a two-game sweep of Bartow County B-Team and win the District 1 title.

Malachai Jeffries hit for the cycle and had two RBIs for Cartersville. Pearse Mullinax also had a four-hit game. Chatman had two hits including a home run and two RBIs. Jacob Peace had two RBIs with a pair of doubles. Brody Tidwell had two hits including a double and one RBI. Collin Genrich also had a two hit game. Nick Zirkelbach (double, RBI); Avery Higgins; Silas Freeman (RBI); Kaden Stephenson; and Davis Wilkey (RBI) contributed one hit apiece.

Andrew Stiles and Hayden Blalock had two hits each for Bartow B-Team in Sunday’s loss. Dawson Craig had two RBIs with a double and Landon O’Neal added a double.

Wildcats eliminated in opening round